While some of Catalans sell their homes in order to abandon the neighborhood were the immigrants arrived, we find other groups which welcome the integration. 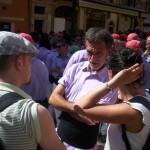 Unfortunately, great number of immigrants is forced to live in the peripherals of Tarragona due to economic constraints. Some of the locals still refuse to intermingle with the immigrants for excuses such as noises but, we believe that these are just a cover for deeper fear that prevents the coexistence and integration.

Furthermore, in districts such as Sant Salvador and Camp Clar, schools receive the majority of the immigrants in the city. A teacher indicated that the children in the school are friends but, the school suffers from lack of communication with parents. 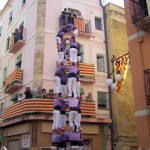 However, Tarragona has a rich net of local associations and the majority of them such as the “Castellers” are recipients and helpful to the immigrants. “Castellers” are the one who build the “Castell” which is a human tower build traditionally in festivals in Catalonia. This is very much true and is attributed to the practical values of Castellers which are trust, team building, and every one is needed to realize one common goal.

Jordi, one of the Castellers, said that they act as a platform for the integration; in the group there are people from all ages, social classes, and cultural backgrounds. Also, he added that they go to schools where they invite children to join the “Castellers”.

In conclusion, the situation in Tarragona is diverse and there are other problems to attend, but also solutions exist.

Children… the relationship or the friendship of children at school could be the hope of the future.

7 thoughts on “Tarragona is the home of diversity and contradictions”