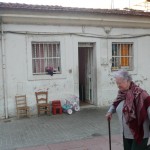 She was born here and keeps the memory of the the small one-floor houses were workers arriving from countryside, including her parents, were lodged in times of the universal exposition of Barcelona (1929).

Since then the neighbourhood have seen lots of history: the times of hope, or war, of repression and as well the arrival of people from far away regions in the south of Spain that contributed to the live of her neighbourhood.

But her neighbourhood is not any more the nice place of her memories, la Senyora Mercè is deeply sad, her face changes when she speaks about it. Ten years ago for the development of the sea front of Barcelona, several Rroma families (“gitanos”) of Portuguese and Spanish origin were given some of the social houses in her neighbourhood.

Since then the neighbourhood has degraded and who could manage left to other areas. “These people cannot learn to live like us” she states.

She feels unsafe and abandoned by the state that should be protecting her in her old times, and she is sorrow for the new apartments that are constructing in the street that will be given to those Rroma families “in a week they will destroy them… and there are so many decent people who need an apartment…”

La Senyora Mercè was grown up to mistrust Rroma people, in her elderly years she is confirmed in her position in her everyday life and she keeps teaching the same to her grandchildren.

Then what should we do to be able to live together??…  and what she says is “Paciencia, paciencia…”

My friend Pedro is a young good looking Rroma “gitano”.

Pedro is the son of a family that moved from the south of Spain, they earn their living as sellers in the flea market. His family encouraged and supported him on following his studies. 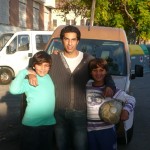 Despite that he has not yet wife or children and he earns much less money than his relatives and people of the same age in the community, Pedro is well known in these streets. He supports children that decide to continue the educational path.

Pedro finished his secondary studies, learnt some English and used the opportunity to travel abroad and encounter other Rroma and Non-Rroma young people that believe that is important to make a change in way towards convivencia between communities.

When Pedro listens Senyora Mercè, his eyes get sad. He nods with his head and may be he thinks again what so many times he heard in his community “Never trust “gadjo”. They will never accept us”

Pedro feels that whatever his community has gone a long way, what remains for the non-Rroma is the association with the most marginalised part of society, the generalisation, the stereotypes and the prejudice.

When the eyes of la Senyora Mercè and my friend Pedro encounters they realise this mutual pain and sadness.

Then what should we do to be able to live together??…

This post is dedicated to those that still belief that makes sense to struggle to break generalisations, stereotypes by bringing people together… that belief that Convivencia is possible.