The opinions of the article do not necessarily reflect the position of Trajectorya. This post is the result of a co-operative learning exercise developed by participants of the Training Course Ahead 4 Convivencia (Catalonia, November 2010). 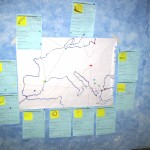 However, the crisis period is being the excuse to create a sense of hating towards the most vulnerable collectives. Firstly, Berlusconi began sending back and destroying Roma camps; later and more recently Sarkozy has repeated the same politics,…And who was the following? It´s said that the Spanish government is thinking to force to delete the Rumanian Roma people camps in Spain, although in some countries like England the Roma camps are legal and accepted.

In spite of this racist atmosphere, we can show to the rest of Europe that if the Politicians order a real protection of the Citizen Rights, the multicultural European situation can become to a Intercultural European situation.  And we are really aware and we offer some strategies of how to do it: “create the spaces and opportunities to cohabitate the diverse cultures”, and the best example is the new training course which is being celebrating in Comaruga, where the key of our success is SHARING OUR LIFESTYLES FROM THE RESPECT THREATMENT.

Is it so difficult to build a real Convivencia? Or may governments want other political interests like the capitalism survive, their own parties interests, etc? We can consider that History of Europe is composed like a collage of different cultures, and  who is free of being a migrant people during our lives, who can sure that his/her background is not built by mixed cultures?